The name seems ordinary, however, the story behind is a true inspiration and sheer hard work of a common man for decades who build a whopping 1360 acres of forest on a flooded river delta. This matriculate from the state of Assam somehow felt for the affected animals in the barren flooded lands of the River Brahmaputra and dedicated his entire life to restore it despite facing humility and several objections from the society. 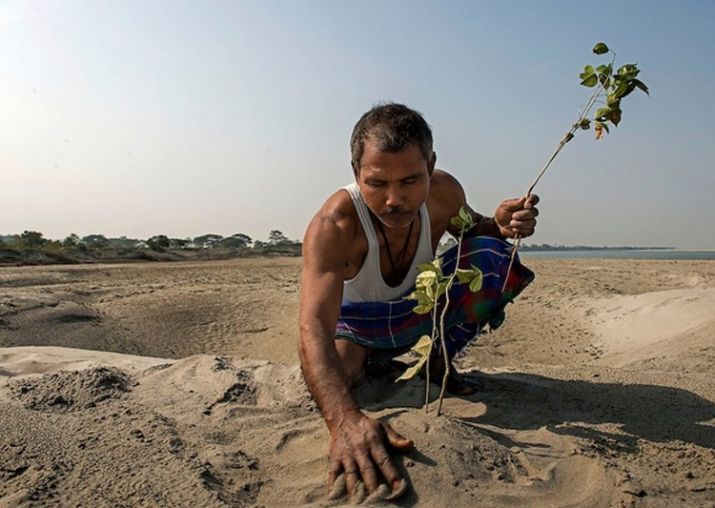 It all started when in 1978, a young boy had returned to his village after completing his high school education. The village was affected by a recent flood on the mighty Brahmaputra and on his way back he saw many snakes washed ashore, however, all died due to severe heat and no shelters on the banks. It touched his heart and the questions like what if the humane race would also end up like this started haunting his conscience. He visited his village and asked elders about the concern, of course, none took him seriously, but somewhere he had made up his mind to brought more greenery in the vicinity.
He even brought up the matter to the local forest department however they shooed him away saying that he could plant trees himself. Amazingly, he just did the same after that. He planted the bamboo saplings on a river delta and started visiting and looking after them daily. He even devised a way to keep the germinating plants moisturized automatically as it was not physically possible for him to water all the plants daily.
Who would have imagined that his hard work on those barren sandy lands would transform the entire area into a huge forest, what would provide shelter to diverse wildlife including Royal Bengal Tiger, Deer, Endangered Rhinos, Vultures and a herd of elephants what would visit his forest regularly?

He had a clear vision, a very few people have actually worked to revive the mother earth and what is actually the need of the hour. What fascinates me more about this story is a 16-year-old boy with no good education could sense that and devoted his life to make his dream come true single-handedly. It was not all that easy for him as he got beaten up several times from the villagers who also threatened him to cut all his trees because of the newly formed forests had started inviting many animals those would destroy the crops and hunt domestic animals but he never gave up.

After more than 3o years of his hard work and dedication, he got named as the Forest man of India by the Vice Chancellor of Jawaharlal Nehru University, one of the reputed universities in India. Later he was also awarded the Padamshri the most prestigious award to be given to civilians in India by the then President Mr APJ Abdul Kalam. Though, his work is widely appreciated now however it took a long time for the people to recognize him. A selfless act without seeking any fame is truly admirable and we don’t often read about such personalities nowadays.  None the less, the man does not need any fame as he would look at his forest, watch the prospering wildlife, he would know the worth for sure.

I am certain that you would also have a similar story to tell from your place too if you have ever known anyone who has selflessly worked for the mother earth, bring his story on !!