New Brunswick’s – the iconic Maritime province along the Atlantic Coast is famous for beautiful rivers, pine forests, huge mountains, and the majestic Fundy bay area. This province is flourished with live-music scenes, arts communities and is full of life, happiness and imagination. New Brunswick is home to 61 National Historic Sites. Saint John and Moncton are the largest cities and Fredericton serves as its capital. The famous Theatre New Brunswick, a professional theatre company based in Fredericton, offers live theatre in the towns and cities of the province. New Brunswick is the only officially bilingual province among all the provinces in Canada. Let’s explore more about this beautiful land.

The climate of this province is intense than that of another Maritime province. It has a humid continental climate with slightly milder winters on the Gulf of St. Lawrence coastline. New Brunswick’s is famous for its cultural activities. It is very easy to find great entertainment and great people around and enjoy music with the fiddle songs to a lot of toe-tapping foot songs. Capitol Theatre in Moncton and John’s Imperial theatre rarely st idle. For art lovers, there is a famous Canadian Beaverbrook Art Gallery in Fredericton which was a gift to the people of this province from Lord Beaverbrook. If you have taste bud on stage and drama then Saint John Shakespeare Festival is only for you. Where a number of productions and related events take place and looking for the new talent in the province. 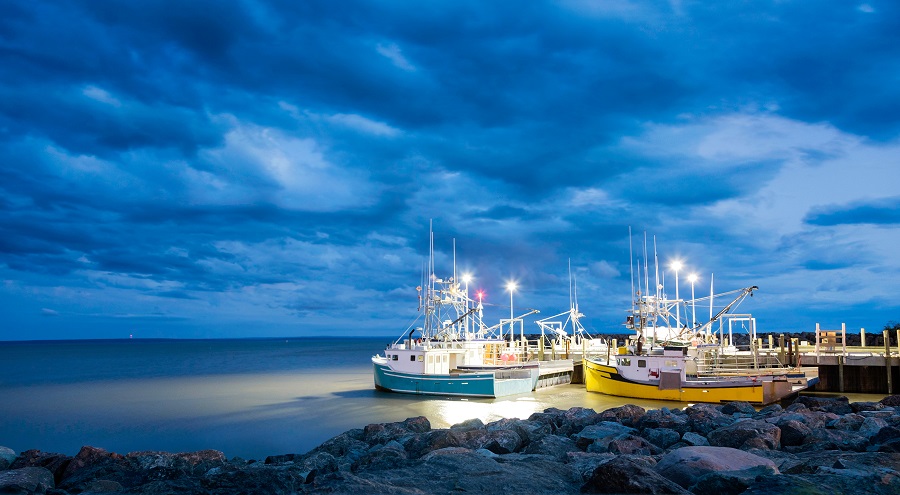 Located between the major cities of Saint John and Moncton, Bay of Fundy is known as a place for the highest tides in the world that rises as high as 16 meters during high tides. The Bay coast is a magnificent piece of art created by the movements of ocean water. The Hopewell Cape is one of the famous points to explore where eroded cliffs provide a spectacular view to the visitors. The Old Sow Whirlpool is another marvel in the bay area that is one of the biggest whirlpools in the world that is as wide as 75 metres. Other interesting phenomena to explore is Tidal Bore where due to the high tide pressure the water on the upper rivers started moving to uphill – also known as the reverse falls. 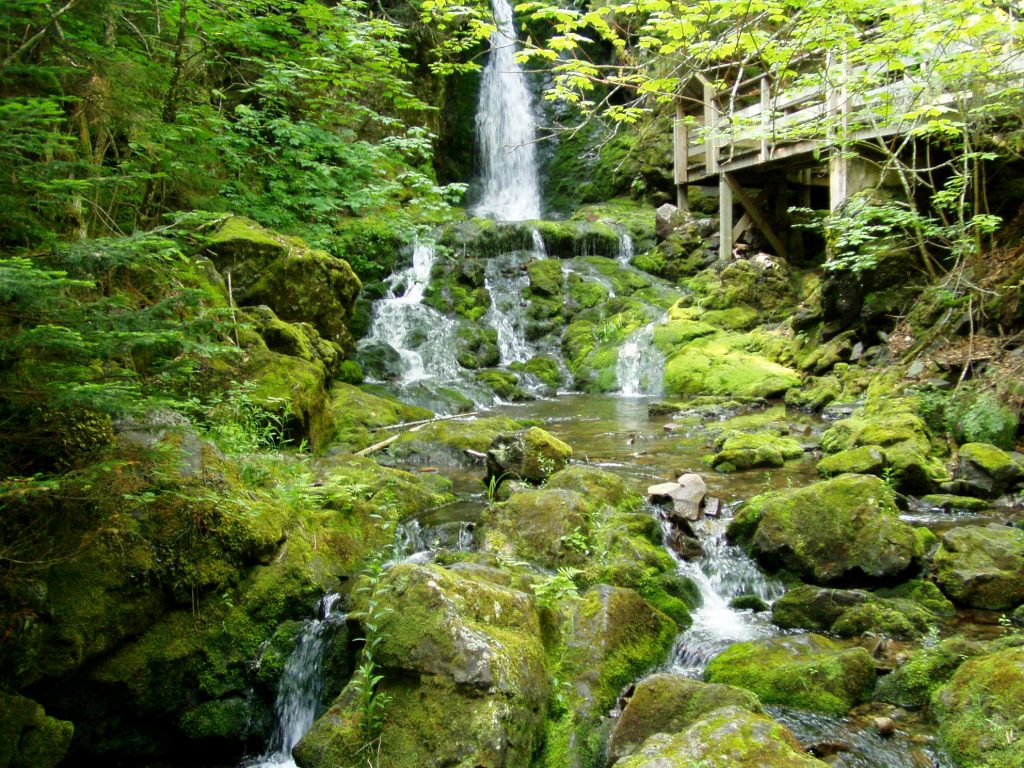 The amazing place where you can connect with the beautiful land, green nature, widespread ocean, and wide open Blue sky. It’s a first national park created in 1948 and is a perfect place to enjoy the refreshing heated saltwater pools. Park facilities include campgrounds, swimming, and a golf course. You can also explore walking and hiking trails in addition to this hike huge mountains, deep valleys, sparkling waterfalls. This is a place where you can enjoy your hobbies or explore yourself with new things, for this canoeing or kayaking is the best thing to do at the beautiful Bennett lake. For plants lover there exist a rare bird’s-eye primrose which is found only in Fundy National park we called it rare because of its speciality that this flowering plant took root in the area when the glaciers melted back from the coast millions of years ago. Three of the most beautiful waterfalls in New Brunswick is near Alma, a village within the park: Dickson Falls; Laverty Falls; and Third Vault Falls. 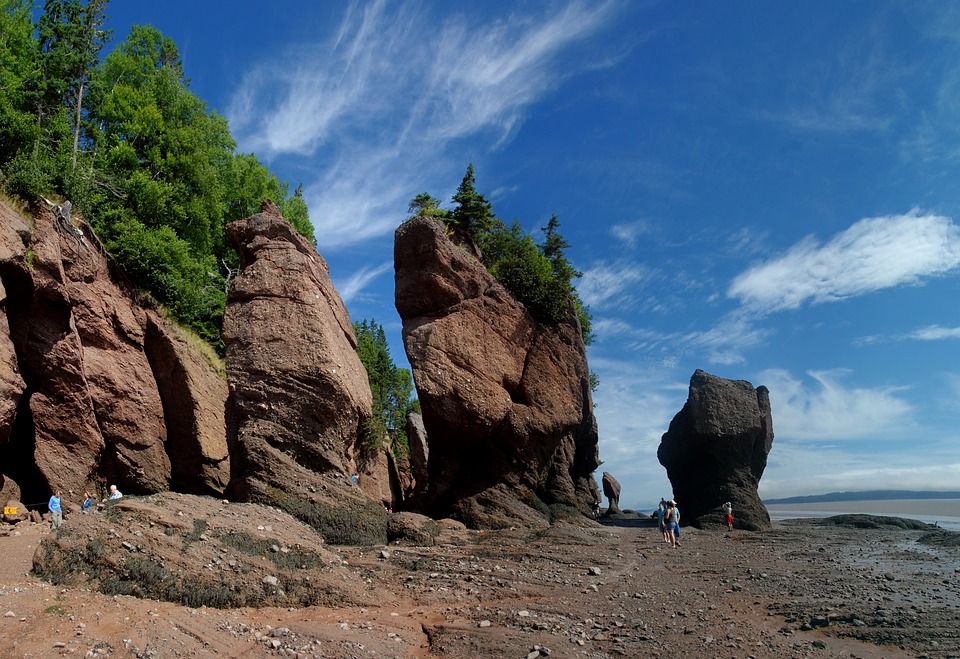 The Hopewell Rocks are one of New Brunswick’s top attractions. Walk on the ocean floor in the shadows of the beautiful rocks. It looks quite different at high and low tides. When the tide is in, they appear as tree-clad islands, which you can view from a series of platforms connected by stairs. At low tide, they become giant, deeply-eroded sea stacks towering above a rocky beach, and you can descend the stairs to the ocean floor to walk among them. At the time of low tide, you can walk 2 km of beach and explore the place. 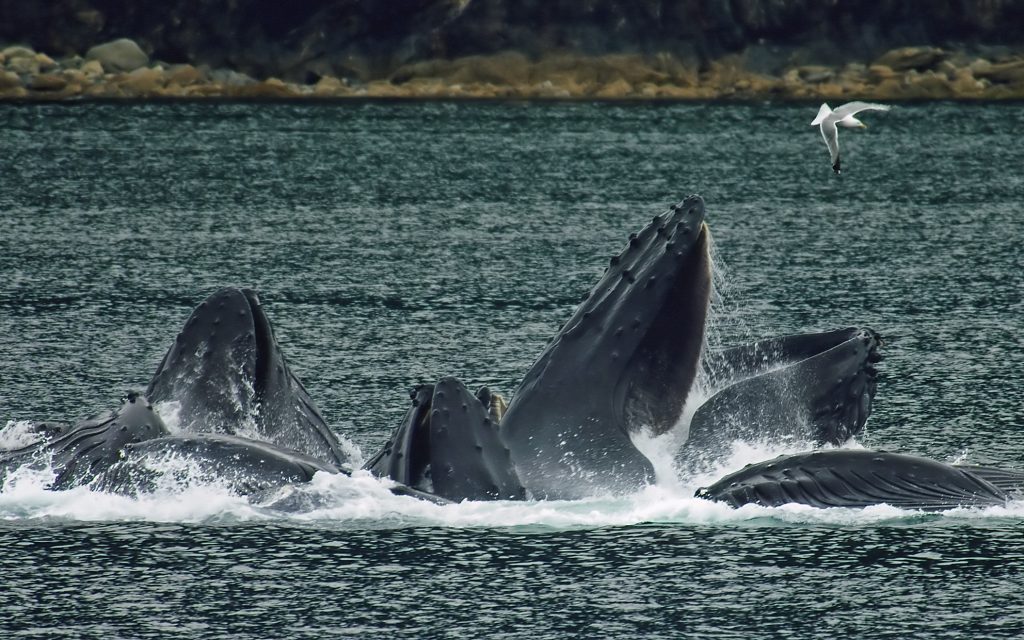 This is a place where you can experience a slice of life through amazing, exhilarating whale watching in the Bay of Fundy. The bay of Fundy attracts as many as 12 species of whales and other marine animals. you can see the Minke and Finback wales in the spring season, by mid-summer you have a higher chance to take a look at more species including the rare North Atlantic Right whale. The season runs from June through October, with maximum concentration in August. Island Quest Marine Whale and Wildlife Cruises, Fundy Tide Runners and Jolly Breeze Tall Ship – these three companies provide a variety of whale watching experiences. Jolly Breeze is popular among younger children especially because of its costumes and onboard activities. 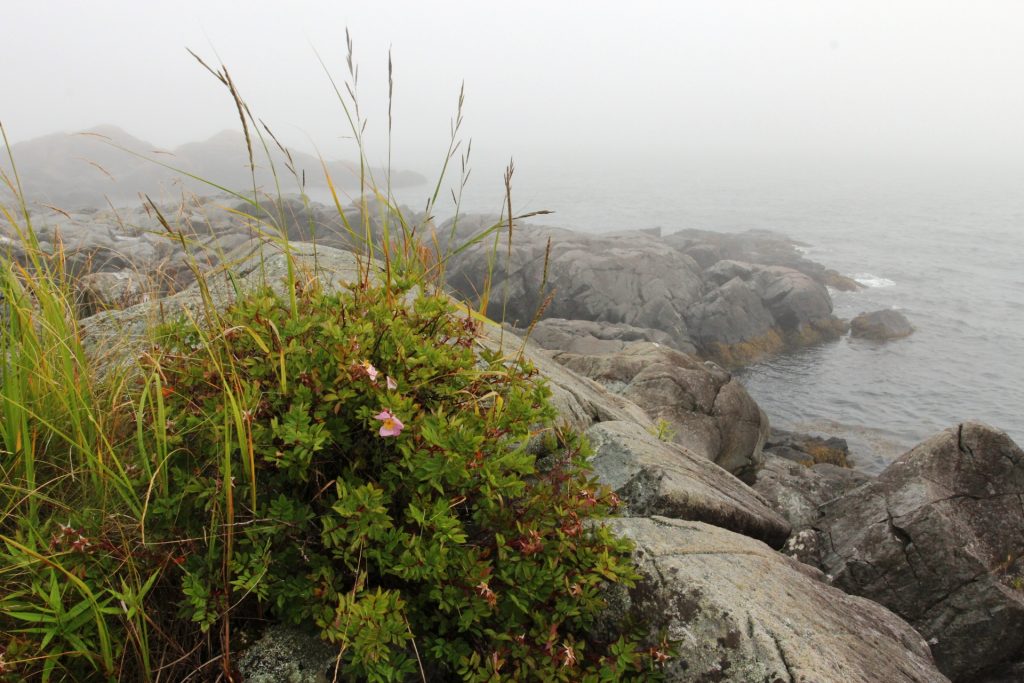 This beautiful Roosevelt Campobello International Park is located on Campobello Island in the Bay of Fundy. The Late U.S President Franklin Roosevelt spent his summers on Campobello island where he enjoyed hiking, sailing, and picnic with his wife Eleanor and children. Just take a tour of the Roosevelt summer home, a beautiful residence with 34 rooms. You can take a guide which describes everything about designs and construction of the house in addition to this their day to day life. If you want to know more about the Roosevelt and Campobello history then you should take a guided tour of the grounds. Every day park features “tea with Eleanor” a delightful tea, with delicious cookies and talks about Eleanor’s life and her accomplishments.
You can enjoy here the most beautiful, picturesque scenery and vistas of forest, seashore, amazing flower garden, seascapes, numerous picnic areas with your loved ones. Now after seeing this eye-catching place you must feel hungry then there is Park restaurant which is open for Monday to Saturday for lunch and dinner and for brunch on Sunday. 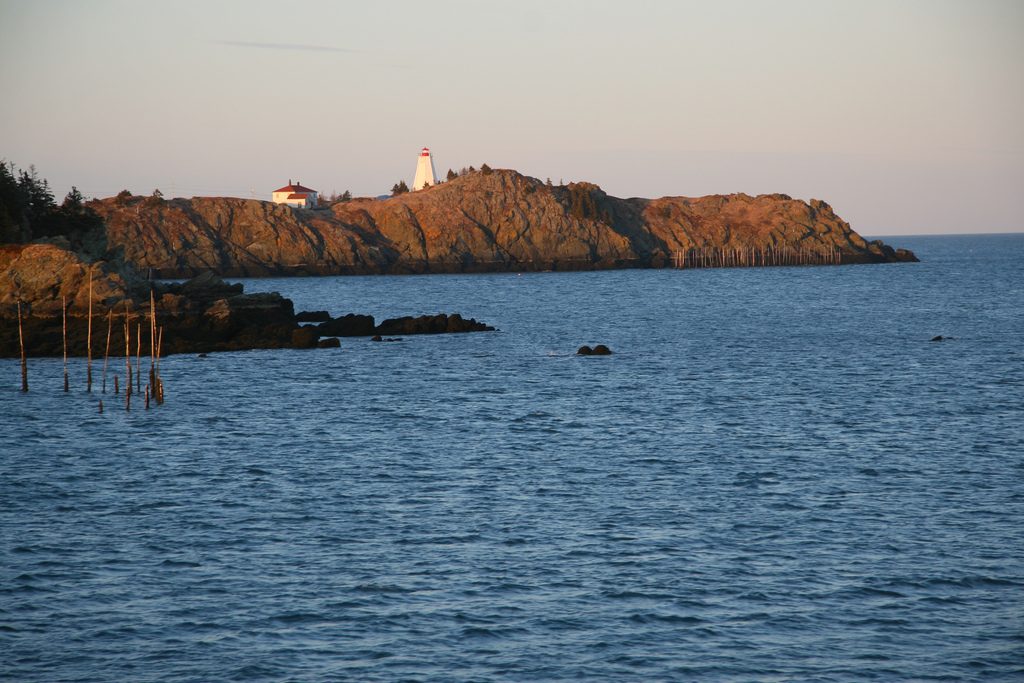 Grand Manan Island is an adventurous place in the Bay of Fundy.This place is popular for birds spot where more than 240 species found including the Atlantic puffin, Atlantic white-sided dolphin, marine wildlife, aquatic animals. This place has all about imagination hiking, kayaking, artisan crafts, camping under the stars or you can tuck yourself into a quaint cottage and just get lost in the beauty of a sunset. Here you will find the number of studios and galleries on the island.

Every year new Brunswick’s celebrates a lot of events and festivals. This province is always ready to welcome their good time in happiest manner. There are a lot of winter and summer events to enjoy which give you some hint of the vibrant culture. Here is the list of festivals. 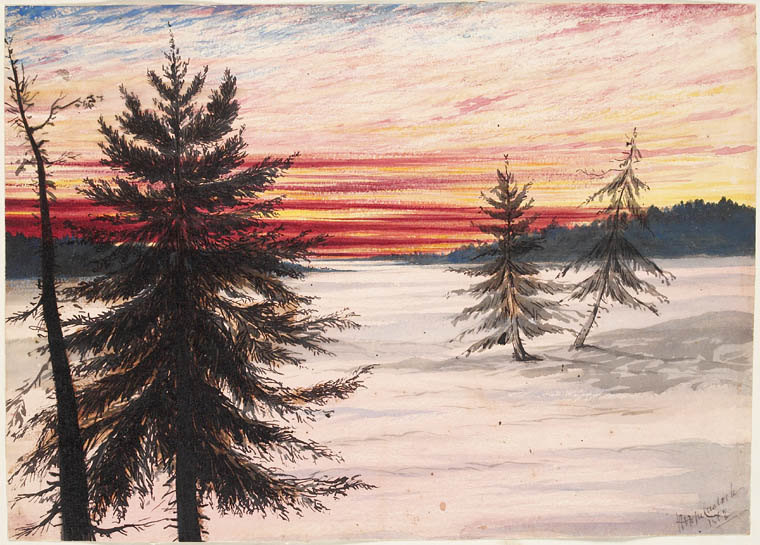 Winterfesthiver festival is celebrated in early February in Fredericton with a lot of enthusiasm, fun-filled activities at the weekend with all family members. The most attractive gigantic ice slides attract the tourist from all the world to try their luck on the seven meter high structures, a snow maze and ice sculptures, dog sledge rides and polar bear games of bowling, curling and golf.

The open-air maritime country fest festival is celebrated for two days in the heart of the New Brunswick’s capital city, Fredericton. This festival is related to music featuring local, emerging, Canadian and International country Music performers. It highlights the best country music.

As looking at the name we can easily guess that this festival which is celebrated on 1 July offers a fun and high-quality day to family. This festival provides a lot of activities and entertainment for children along with all family member on stage in officer’s square. There is also an arrangement of delicious and yummy food for tourist and an amazing fireworks display at the end of the celebrations.

1 July is the day which offered a lot of events to celebrate Canada day, Whoa Canada.
The day starts with a Canada day bike ride followed by an afternoon of art displays, entertainment especially for children, food products offered by vendors along with that there is also a four hour candy day concert on Main street followed by the Canada day fireworks in Riverfront Park.

Highland games festival is one of the most beloved events for over 30 years celebrated in late July. This festival celebrates the Scottish culture with games showcasing the skills of that expert in piping and drumming, dancing, traditional athletics apart from these activities it also offers entertainment and workshops.

As the name of this festival tells about it – it’s a festival of kites celebrated in Mid August with various shapes and sizes of kites.this festival also offers choreographed kite flying and some eyecatcher kites which is sewed by them.