Things to do in Atlantic Canada - Explore Nova Scotia

If someone wishes to describe Nova Scotia, it would go like this- the scenic trails that one might wish to never get over, an ocean that rhymes with the beat of wanderer’s heart and an escape that will never escape from anyone’s memory. The beautiful experiences gathered here sets Nova Scotia apart to make an irreplaceable space in your heart. The silence, the green affair, the fun and party, everything seems to be aligned perfectly. But the blue factor is what sends a chill throughout the body of travellers, thus making it one of the three maritime provinces of Canada after Prince Edward Island and New Brunswick. Being such a charm, how can Farenexus miss to enchant you from this exotic escapade? Here are some of our best picks in Nova Scotia for you:-

Be ready for the best drive of your life as the backdrop in Cabot Trail is nothing less than that of a paradise. With the ocean on one side and flora-covered hill ranges on the other, it’s hard to resist this trail. Such exquisiteness has turned the eyes and attention of almost every traveller and as a resultant, it has become a major tourist attraction. Many bikers come here to ride along the road and openness. Now with time, many unique experiences have also been flourished to make the ride more exciting. Thus it’s best to go slow in this road to grab the most out of it.

Cabot Trail, along its path, also brings to you Cape Breton Highlands National Park. Spread in an area of 949 square KM with plenty of activities to do, this national park needs to have a separate mention. Famous for hiking and camping, it lets you spend a while in the wild. Commonly spotted creatures here are marten, lynx, muskrat, beaver, moose and racoon among others. This park is also the proud home of Skyline Trail, a walk-in-a-park trail along the sea coast and hills that can give you a sight of whales if you are lucky!

Hyped up because of its history stuffing, Lunenburg is well worthy of this attention. Designated as UNESCO World Heritage Site, this city is way different from others in Nova Scotia. Strolling through the 18th and 19th-century buildings lined up against the picturesque harbour, trailing along the sea in a classical cruise, reliving the era of industrialization through museums is barely the beginning of the list of delights Lunenburg has in place for you. The food here is a treat to the taste buds and don’t forget to take a sip of wine in “open to public” wineries.

Sydney, the centre of Cape Breton Island, is a wonderful city known for its hard-to-find blend of history, art and nature. This city showcases its preservings of the past in a captivating manner. Especially communities and localities like Membertou, who take pride in their journey, portrays it in the museums and heritage parks here. But history isn’t the only magnet here, Sydney is set up near beautiful nature outlets that let you have a peaceful time around the green landscape. Thus it won’t be wrong to say that Sydney shines throughout.

5 Days in Whistler – Everything you Need to Know

Approximately 40 KM away from Halifax, lies this beautiful wildlife park. Spread in a small area of 99 acres, this spot is a great option to have a day trip and catch a glimpse of animals in their territory. This park was inaugurated in 1954 and since then had attracted a lot of visitors to become a popular picnic destination. Shubenacadie Provincial Wildlife Park is the only home to Sable Island Horses in the world. Other popular residents include artic wolf, cougar, black bear, raccoon, bald eagle, marten, etc in the family of 90 species of mammals and birds.

Peggy’s Cove is a small municipality located along the shores of Atlantic ocean. This feel-good town believes in the notion of “Old is gold”, thus provides travellers with a beautiful and traditional expedition. Generally, people staying in Halifax take a day trip to Peggy’s Cove, which is 43 KM away from it. Being a popular pick of tourists, generally huge mass flock here, especially in peak season. Some of the places or things that make this attention worthwhile are Peggy’s Cove Lighthouse- a romantic lighthouse on the shore that makes up for a perfect picture spot and boat tours to watch the sun plunging into the ocean or to catch a lobster. 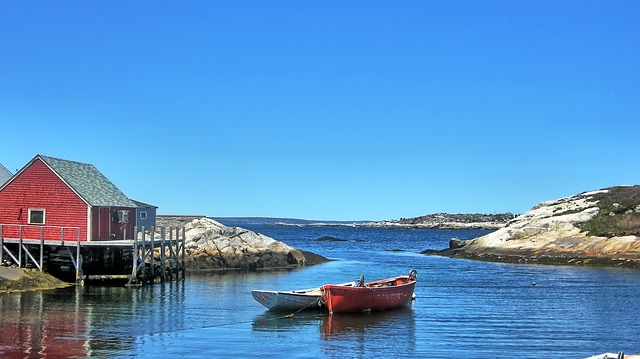 Probably the best is saved for the last. Being the capital city of Nova Scotia, Halifax is a joyful place that has a lot of interest areas of tourists covered. Whether it’s going back in history or having a peaceful day in lush green gardens, experiencing the art or engaging in fun activities, there is a lot of ground here to explore. Best recommendations include Halifax Citadel where you can be a soldier for a day, Point Pleasant Park- for the ones exploring for various hiking spots, Victorian Gardens- beautified by flowers, ponds and bridges, there are a lot of click-worthy places here.

While exploring all its beautiful cities if you have a tooth for adventure, you might want to check out the list of these unmissable experiences in Nova Scotia:

A sight that a lot of people crave for, can be found in the shores of Nova Scotia. There are a lot of specialized companies in Lunenburg, Ingonish and other coastal cities that provides quality time with these magnificent creatures. Some of the species of whales found here are Minsk whales, fin whales, pilot whales, humpback whales or even blue whales!

Tidal bore rafting is a fun activity that’s quite famous here. Wild waves of river swinging the boat with its power and making our heart pump high is hard to be ignored. Shubenacadie River and Bay of Fundy are the best places to experience the madness of the waves, which might get pretty intense sometimes, thus increasing the thrill.

3. Spend time in a winery

The wine flows through the veins and heart of Canadians. But ever wondered how it is made? Well, you can have a close look at wineries in Nova Scotia and go through the journey from grapes to the one of the most loved Canadian beverage. Wolfville, called the wine capital of Nova Scotia, has a lot of vineyards to explore.

If trying new food is your hobby, then it is Nova Scotia’s forte. A lot of recipes awaits you here to give you finger-licking delights. You can explore on your own or hop onto a food tour. But make sure you try out donairs, oatcakes and oysters. Halifax is probably the best place here to try out great food.

The lobster experience wasn’t included in the previous recommendation because it deserves a special mention. You can choose a lobster of your choice and cook yourself or catch one before it. Just go into a restaurant if you are in a hurry. Shelburne, the lobster capital of Nova Scotia, is the best place (among others) to get this crossed off your list.

Nova Scotia is different from other provinces because of the amazing fusion and serene air it provides. Marine experience is usually the less explored among all others thus Nova Scotia significantly reduces the gap with perfect hospitality for marine enthusiasts. But to enjoy a place fully, don’t go dry up your savings reaching there. For that Farenexus has brought to you cheap flight tickets so you can travel without worries.