A scenic masterpiece has been placed by God on the North-West of the United Kingdom in the form of Iceland. Contrary to its name, Iceland is dominated by nature in its true colours. And these colours form such a beautiful spectrum that every year it attracts more people than 6 times its population! The population density of Iceland is 3.4/square km, making it one of the best place to enjoy the disconnectedness in the world of constant nagging. Iceland’s exquisiteness has led many artists to dig deep to a new depth of creativity and the resultant, in the form of architecture, art, etc, has almost always stunned the globe. Thus it’s hard to pick here the better out of the two- the highness in nature or the dips in art. But the important thing is that Iceland lets you explore the best of both and more. Thus Farenexus, a travel metasearch engine, has decided to floor you by plunging deeply in this charming nation:-

Ever wondered what a volcano would look like from inside? Well, here you can walk inside one and explore one of the most seemingly impossible places to reach! Thrihnukagigur Volcano last erupted around 4000 years ago and with time the lava or magma has sheltered itself deep inside the ground. That doesn’t happen usually as in most cases the magma gets cool at the very same place as the time ticks. Lucky for us, that wasn’t the case for Thrihnukagigur Volcano. That let a huge cave-like structure inside it for us to be mesmerized from. Many guided tours are available and can cost around 350 USD per person. But before sailing to this expedition, beware that you need to hike for like 50 minutes to reach the spot and then go down 120-130 meters using a lift. 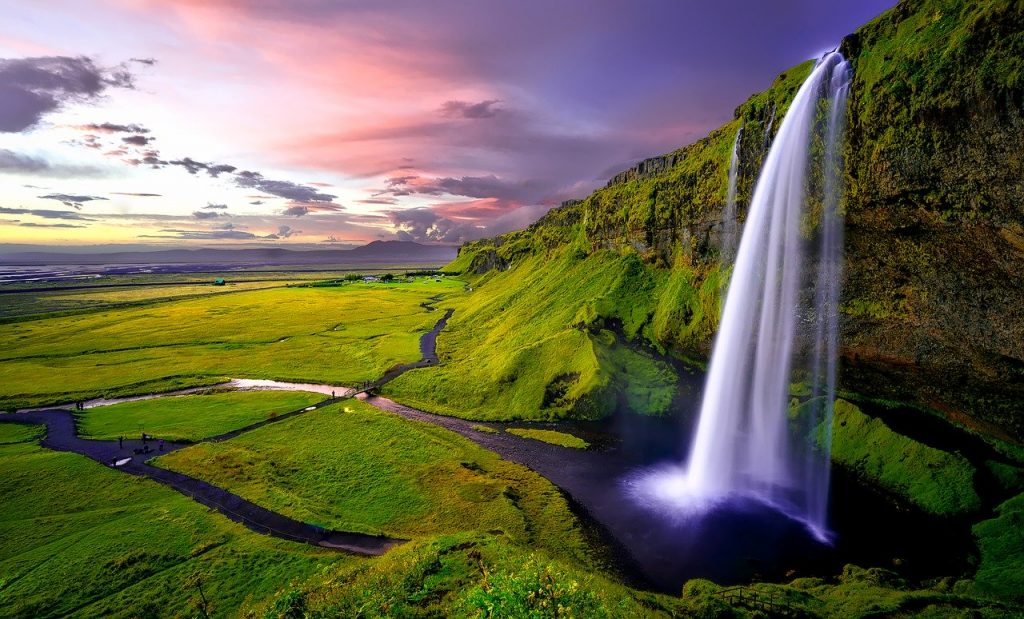 Image by David Mark from Pixabay

2. Go from one continent to another

Are you figuring out how is this possible because Iceland is a European island with the nearest nation being the United Kingdom, that too 849 miles away? Yes, Iceland belongs to Europe but what most people don’t know is that it also lies on two tectonic plates-
North American and Eurasian. So geographically it is a part of both North America and Europe. A bridge has been created between the boundaries of these two tectonic plates and the boards on the ends actually welcomes you to Europe and America respectively!
These two plates are moving apart at the rate of 2 cm per year dividing Iceland into two parts. These movements of plates are also responsible for the earthquakes and volcanic activities on the island.

Located on the western coast of Iceland, Snæfellsjökull National Park is full of hiking trails with a landscape like nowhere else. Here you can stroll on a lava field with snow-capped mountain ranges on one side and an ocean on the other. The star attraction of this park, Snæfellsjökull Glacier, has a volcano which was last erupted approximately in 200 CE creating lava fields and lava tubes. This national park is also home to numerous animals and birds to get a sight of. Beware of getting your heart captured.

The Happiest Countries in the World – How many have you been to?

Puffins are tiny birds with black-white feather combination and a colourful beak. They are so adorable and cute that it will melt your heart and make you go awe in an instant. There are four species of Puffins and one of them is Atlantic Puffin. Iceland is known to have around 60% of Atlantic Puffins across the world. They even have an island dedicated to them i.e. Puffin Island. Though it is not the only place where you can find Puffins in Iceland, it surely is the best one. Puffin Island is located half a mile away from
Reykjavik and you can hop onto continuous ferries to reach it.

No, we are not talking about an electric geyser which heats the water. Geyser is also a natural hot spring which irregularly boils water and spats it out high in the air. This effect is due to the presence of magma which is found near volcanoes. It is quite a rare phenomenon and can be witnessed at just a handful of places around the globe with Strokkur Geyser in Iceland being one of them. The frequency of water burst here is approximately 6 minutes and reaches the height of 20 meters on an average. Being one of the most unique sights to click, don’t even think of missing it.

Hallgrimskirkja is an architectural marvel that has become one of the most popular tourists place in Iceland’s capital, Reykjavik. At the core, it is a church whose first brick was laid in 1945 and the construction was completed 38 years after that! With a height of 74.5 meters, it is one of the tallest buildings in this nation. You can go to the top of the church and cherish the beautiful skyline of this city. Inside Hallgrimskirkja, there is a 25-metric-ton-weighing and 49-feet-tall pipe organ which sways the visitors with its melodies. It is the first place to hit when in Reykjavik.

Gullfoss, also called “Golden Falls”, is located 60 miles away from the capital and in the canyon of Hvita river. Gullfoss gives you a picture-perfect landscape that is likely to stay long in your heart for a long time (or forever). An endless open field with a river cracking through, falling twice in a matter of meters and taking a sharp turn- that is a sight hard to find a replacement of. It is a given that this is one of the most popular places in Iceland among the wanderers. Though the total height of the Gullfoss Fall is just 32 meters, that doesn’t make it any less than the taller ones.

Blue Lagoon is a man-made bathing arena that is not nearly as normal as it just sounded. It is located near a geothermal power plant in a lava field near Grindavik. The geothermal plant extracts water out of the surface near lava fields, which is then used to turn the turbines to produce electricity. The water is then cooled down and fed to the Blue Lagoon for us to bath at. But what’s special is that this water is high in silica and other natural minerals. This mineral-rich water is believed to have skin-heeling properties and because of that people also apply the mud created by it beneath them to their body. If you are thinking it’s just a swimming pool then remember that it receives approximately a million bathers (and growing) every year.

Get ready to be blown away by the scenic beauty of Vestrahorn Mountain. The view closely resembles to what we have only seen in fantasy movies. Medium-sized mountains adjacent to the beach with black sand- it seems too good to be true, but it is. Here you can also explore the movie set of Vikings village. Vestrahorn Mountain is located in a remote area and hasn’t gained much popularity until recently. It might be hard to reach but once stepped the foot there, it would all seem worth it. The good news is, due to increasing attraction towards it, reaching there has become a relatively easier task.

As said earlier, Iceland has given many creativity wizards to the world and their artwork, kept in the walls of many art galleries and museums present here, continues to amaze people consistently. Though there are many, most of them are in Reykjavik. The most famous ones include:- Reykjavik Art Museum, Ásmundarsalur, The Living Art Museum and Listamenn.

Iceland is small but the impact it leaves on the heart and mind of tourists is large. The openness and silence it has is a treasure to the soul. No wonder this nation is always smiling at the top of the happiness index and safety. When such positivity flows all around, negativity keeps a constant distance. But for you to drown in the magnificence of Iceland, you have to fight your mental barrier of not taking action. To help you, Farenexus has brought cheap flight tickets so that travelling doesn’t stay a luxury.